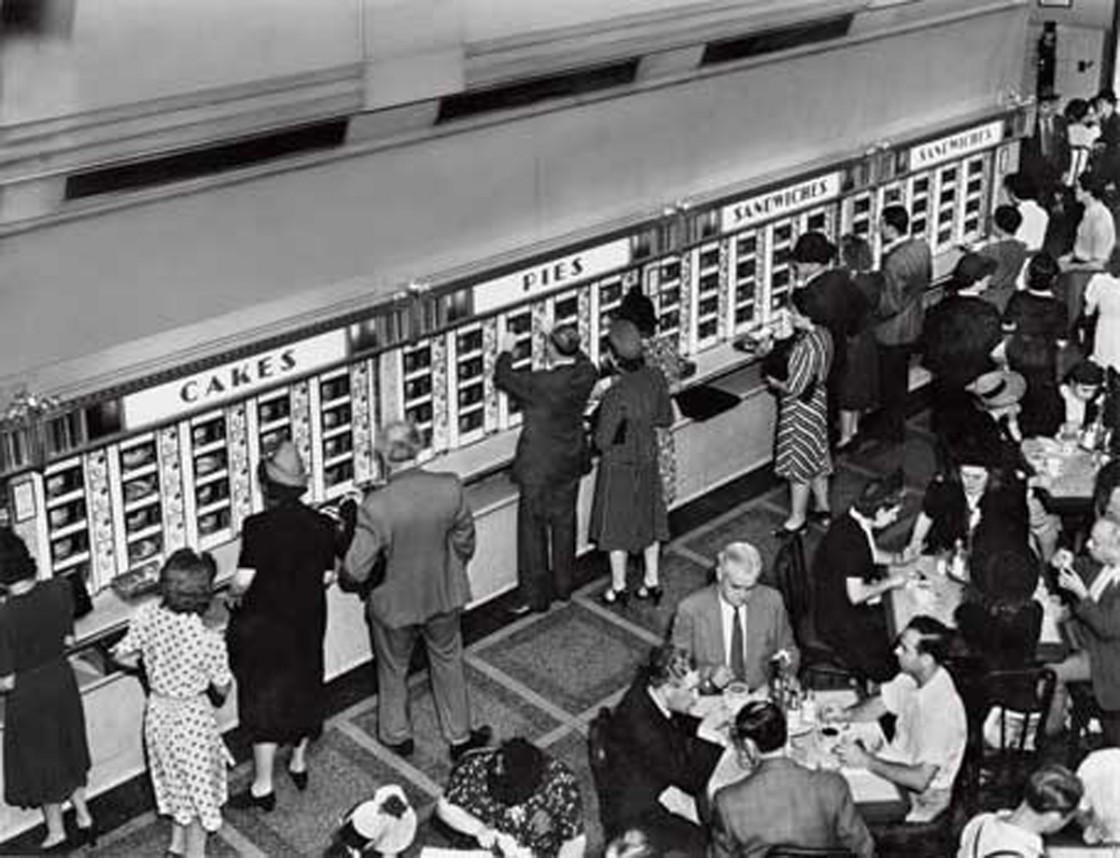 Even though the Automats became an integral part of the American fast food culture, they were actually a German invention. Long before arriving to the United States in 1902, there were already successful automatic restaurants in the Berlin zoo as far back as 1895, in the international exhibition of Brussels in 1897 and “buffets automatiques” in 1900 Paris. note

After a great success in their original lunch room in Philadelphia Horn & Hadart decided to bring their idea to New York. And they spared no expenses. The first New York Automat was a jewel with glasswork by artist Nicola D’Ascenzo, walnut-stained chairs and carrara-glass-topped tables, white marble floor with large black circles and wood-framed mirrors on the wall. The other restaurants were also characterized by similar high-end design and the menu satisfied the epicurean sensibilities of the turn of the century. In an era that loved anything mechanic, “the automat had an enormous effect on what New York City was,” says the man now holding the largest collection of what has remained from the old machines. “You had artists, painters, lawyers, businessmen all sharing the same public space, eating the same food. And it was the best food and there was enough to go around. The place was a unique meeting place for people of all walks of life.”

With this atmosphere and their instant popularity, Automat restaurants were mentioned in countless popular media, from Marilyn Monroe’s song in 1953’s “Gentlemen Prefer Blondes”, “A kiss may be grand, but it won’t pay the rental on your humble flat, or help you at the automat.” to a 1993 TV episode of Star Trek- Deep Space Nine, that features a “Replimat” and of course, they became ideal backdrops for cinematographic scenes.

An automat first appears in the 1925 silent film “The Beautiful City”, being robbed off its nickels by a gangster. Since then it has been steadily appearing in films, even after the disappearance of the vending machines from the urban eating culture. Older movies tend to include lengthier scenes that pay special attention to the architecture of the restaurants, while newer ones promote a nostalgic image of the automats but in most films the heroes have encounters in the Automats that prove crucial for the continuation of the plot. The simple yet miraculous idea of the automat as a wall of goodies has proven to be a versatile cinematic backdrop for dialogues and Tati like sketches. A world of diverse food consumers is connected by the Automat, a huge human machine preparing and distributing food. Just for a few moments the automat becomes transparent, allowing the communication of the front with the kitchen staff at the back. It is precisely this property that makes it so appealing to the narration, that the scenes happening there could not have taken place anywhere else.

Mitchell Leisen’s comedy “Easy Living“, filmed in 1937 during the Depression, features its own hungry heroine. There is an 8 minute long scene taking place in an automat, where Jean Arthur runs upon Ray Milland, Mr Ball’s rich son, on his first day at work. Charmed, he tries to help her by slipping her free beef pie. The scene concludes with his discovery by the police and him accidentally pulling the lever that spectacularly opens all vending machine glass doors, resulting in a big food fight among unsuspected customers and the couple escaping amidst people rushing in the automat to collect free food.

In “That touch of Mink” (1962) the country girl Doris Day encounters the associate of rich businessman Cary Grant, who is trying to persuade her to accept his bosses’ excuses for splashing her with his car earlier that rainy morning. She buys food from the Automat and at the same time she looks for her friend Conny, who works in the Automat kitchen. “Where are you?” Conny asks, “At the cucumbers” Doris replies. The dialogue is shot through the Automat window.

In “Dark City” (1998) the hero visiting an Automat to get back his wallet, discovers for the first time his unusual power to change the built environment around him. Not surprisingly, his discovery comes when he is able to force open the machine’s door only with his concentration.

The first Automats were about fast serving of high quality nutritious food and often contained gourmet dishes in their menus. But they did play their role in the rising fast food ethics with the popularization of take away food, under the slogan “Less work for Mother”. In 1966 some of the automats were replaced by the Windowmats, facing directly on the streets. This was a profound change in the culture of the Automat; not anymore a restaurant where one could have a real meal but a source of cheap food aimed at busy passers by.

The time of the Automats might seem long gone with the original Horn & Hadart’s vending machine from Philadelphia now being a part of Smithsonian Institution and their last restaurant in New York closing its doors in 1991 but some Windowmats remained. Smullers and Febo, the two Dutch favourite fast food chains, offer frikandel and kaassoufflés behind coin-operated glass doors already for years now and a similar chain is thriving in Japan. A new chain in the south of Spain is also re-introducing automat restaurants and claiming to return to “A full range of home made products in a fast food environment.” The main difference however is that they all use the automats as a fast grab & go, cheap and queue skipping food. They completely reversed the relaxed eat & meet idea the Automats once were. And the fabulous cinematic encounters vanished with it.

Read the article at the Architecture Film Festival Rotterdam website.

Everyday life on the offshore metropolis

Pearls in the City – AFFR

It could have been my grandfather up there – AFFR