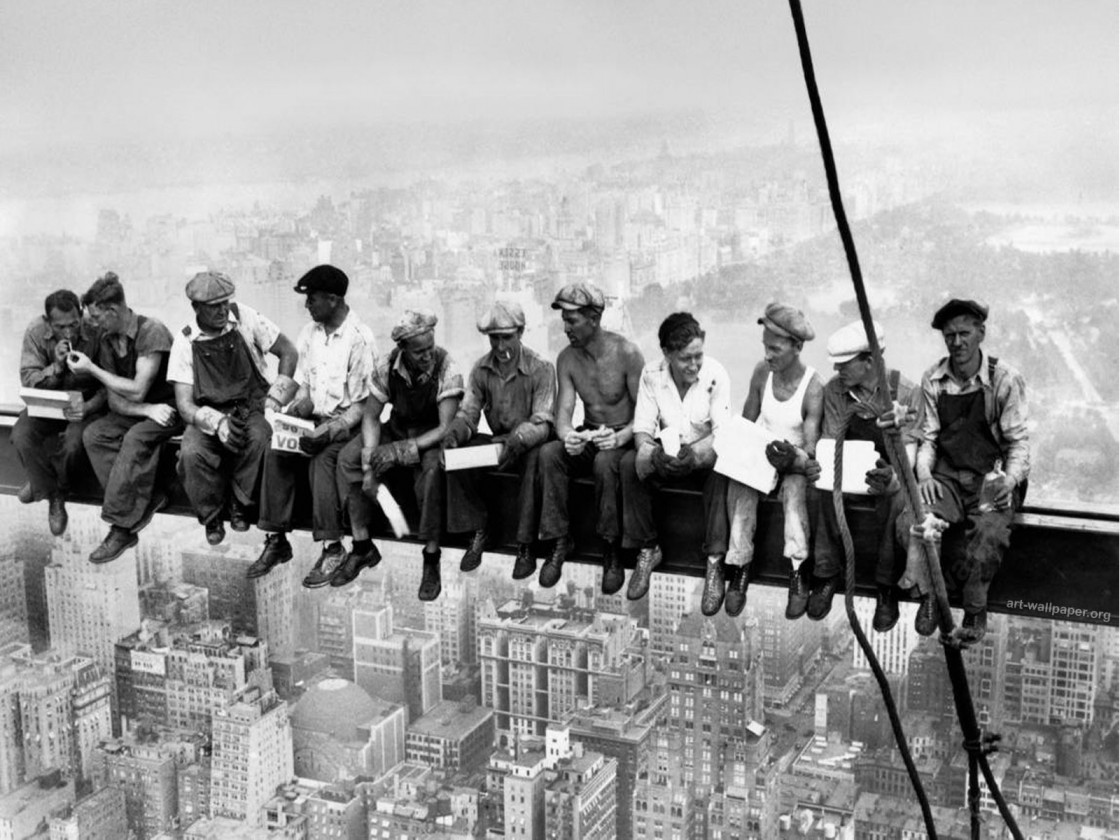 The picture of eleven steel workers eating lunch on a girder 250 meters above ground with Manhattan under their feet and Central Park in the background is famous. It is considered the most iconic picture of what New York is all about: hard working common men building a city of wonders.

The picture was first published in the New York Herald Tribune on October 2, 1932 with a caption that read: “While New York’s thousands rush to crowed restaurants and congested lunch counters for their noon day lunch, these intrepid steel workers atop the 70 story RCA building in Rockefeller Center get all the air and freedom they want by lunching on a steel beam with a sheer drop of over 800 feet to the street level. The RCA building is the largest office building in terms of office space in the world.” Even though the men posing in the picture are real workers, it seems that the setting was staged to drum up excitement about the project’s near completion. In the early 30’s the alternative line of men would be the one waiting in a bread line but despite its hopeful message, the picture went unnoticed for about 60 years in the archives of the Rockefeller Centre, before becoming a popular icon at the end of the ’80s, when it was printed on large posters, on cups and t-shirts and became the base of numerous parodies featuring famous actors, cartoons, babies and even pregnant women.

Apparently it is very easy and attractive for Americans to identify oneself with the fearless men who helped to build up America as we now know it, and according to almost all the people interviewed in the documentary, this is the reason for this photo’s success! The anonymity of the men pictured feeds the thought that one of these men can be a distant relative, one of the poor immigrants that literally made it to the top. This has been the starting of point of the documentary in the first place. Ó Cualáin saw a copy of this photo in a bar in a small Irish town. The locals claimed that they identified two of the men as former villagers.  Ó Cualáin decided to set out on a journey to find out more about these. Coming from the Irish  countryside, how did they end up on top of the RCA building?
What seems as a paradox throughout the film though is the fact that while discovering the identity of the men on the girder appears to be the main goal, it is repeatedly stressed that the exact details don’t matter; the true power of this picture is exactly the fact that these are ordinary hard working men during a difficult period that shaped New York.

The title of the documentary seems to be an indirect reference to the work of Lewis Hine, a photographer who has mistakenly been credited for taking the famous picture. Lewis Hine, started his photography career in 1904 by taking pictures of immigrants arriving at the Ellis Island. His most famous work though is the documentation of the building process of the Empire State Building some of which were later included in his book “Men at Work” (published in 1932).

Instead of looking into the particular identities of his models, Hine, truly used them to expose the conditions of life and labour in the margins of the cities, making an actual contribution in the improvement of legislation and social reform. He did not only show things that had to be corrected but things that had to be appreciated. This constitutes the basic difference between the photographs of Lewis Hine and the documentary of Seán Ó Cualáin. The first one sensitively looks into common people in their everyday lives convincing the viewer that there is something majestic into these commonplace activities. 80 years later, these same people are fetishisticly transformed into contemporary heroes that need to be identified and elevated in popular memory.

Lewis Hine’s work is exhibited in the Netherlands Fotomuseum (Rotterdam) till January 6, 2013. Both the exhibition and the documentary establish the relationship between the great construction sites of the 1930’s and the buildings being erected nowadays. In the Netherlands Fotomuseum, Hine’s pictures of the Empire State Building are shown next to Ruud Sies’ photos of De Rotterdam, while in ‘Men at Lunch’ there is a part about contemporary ironworkers at the World Trade Center construction site. The emphasis in both cases is on the fact that even though the building technology has evolved we still depend on the people who are willing to take the risk of the manual labour. As Hine put it “Cities do not build themselves unless behind them are the brains and toil of men“.

Read the article at the Architecture Film Festival website

Everyday life on the offshore metropolis

Pearls in the City – AFFR